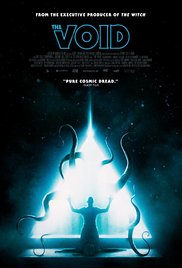 I got slightly more gore than I had predicted with this sci-fi horror flick, but it was hard to stop watching! I wasn’t sure what to expect and the writers/directors kept me guessing throughout. Jeremy Gillespie and Steven Kostanski are both credited for writing and directing this film and they both have an extensive background in filmography. Most recently, they worked on Suicide Squad in the Art and Makeup Department, respectively. Unlike Suicide Squad, I can actually find something good to say about this movie. Although the gore was a bit over the top, the monsters in this movie were truly terrifying. And they don’t shy away from showing you every gross imperfection. It’s plain to see how each of the director’s backgrounds contributed toward this horror movie. Definitely not for the faint of heart! Happy Watching.

“Statistically you’re more likely to die in a hospital than anywhere else.”