Few trilogies can hold a candle to Lord of the Rings and even fewer hold up as well over time.  Whether you’re a die hard fan of the books and the world J.R.R. Tolkien created or just a casual movie goer (such as myself), there is plenty for everyone to enjoy in this trilogy. Let’s discuss each movie in depth…… 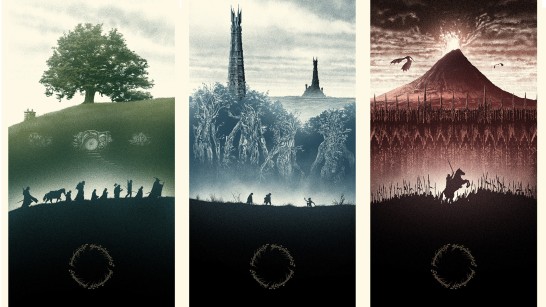 The Fellowship of the Ring

It’s plain to see that these movies were extensively planned out and executed to perfection. I say this because the first movie is not in any hurry to advance the plot as much as it is introducing characters and backstory. It may start off slow and with narration, but the next two movies benefit tremendously from all the backstory we’re given. This is why the first movie in a trilogy, or origin story if you will, tend to be better than their successors. Because, like the characters, the audience is learning the rules of the universe and the movie can take it’s time setting up those rules. For instance “the one ring to rule them all”.  We learn right away about this powerful evil ring, but only gradually throughout the movie do we see the extent of it’s powers. Invisibility seems to be a side effect from putting on the ring, but what I found particularly interesting on my latest viewing is how the ring affects EVERYONE that comes into contact with it. It brings out the worst in people, sometimes even without their knowledge. This of course takes it’s toll on Frodo the ringbearer, but it makes it easy to understand his broken spirit in Return of the King.

The second and possibly best of all three movies, The Two Towers gives us a sense of just how vast Middle Earth is. While it may seem that The Fellowship of the Ring ended rather abruptly, The Two Towers picks up the pieces and does not slow down! With the Fellowship broken up, it’s up to our heroes to overcome even greater challenges than they imagined. Not just to “win” but for survival. This movie is responsible for one of the greatest battle segments in film, The Battle of Helm’s Deep. Not only packed with action, but realistic effects and moment of greatness. This is by no means a rushed battle scene and it’s a stark reminder of what’s at stake in this world. Relative to The Battle of Helm’s Deep, Frodo’s story line may seem a bit “filler”, but we continue to see his journey and the ill effects of the ring on his judgement. It is also in The Two Towers that we see Frodo sympathize and even defend Gollum to others.

Return of the King

The final installment or climax gives us several battles, as well as a much needed resolution for the story and our beloved characters. The first two movies do an excellent job of setting up the characters and story, and Return of the King delivers the cinematic finale that this epic journey deserves! Aragorn accepts his fate as Isildur’s heir and summons an army of the dead to save Gondor from Sauron’s forces. The hobbits are all split up for a time, but each gets their moment to shine, especially Samwise Gamgee. After my latest viewing of these movies, Sam quickly turned into one of my favorite characters. No nonsense, honest and loyal. And without Sam, you could argue, Frodo doesn’t make it nearly as far and the ring survives. Loved the hobbits in Return of the King and how Aragorn, King of Gondor, kneels to them at the end. Goosebumps every time! Part of me wishes the movie ended right there, but it’s kind of nice to see the hobbits come home and resume their peaceful life in the Shire.

Love, love, love these movies! I have to watch the trilogy at least once a year. Happy Watching.

“One does not simply walk into Mordor”